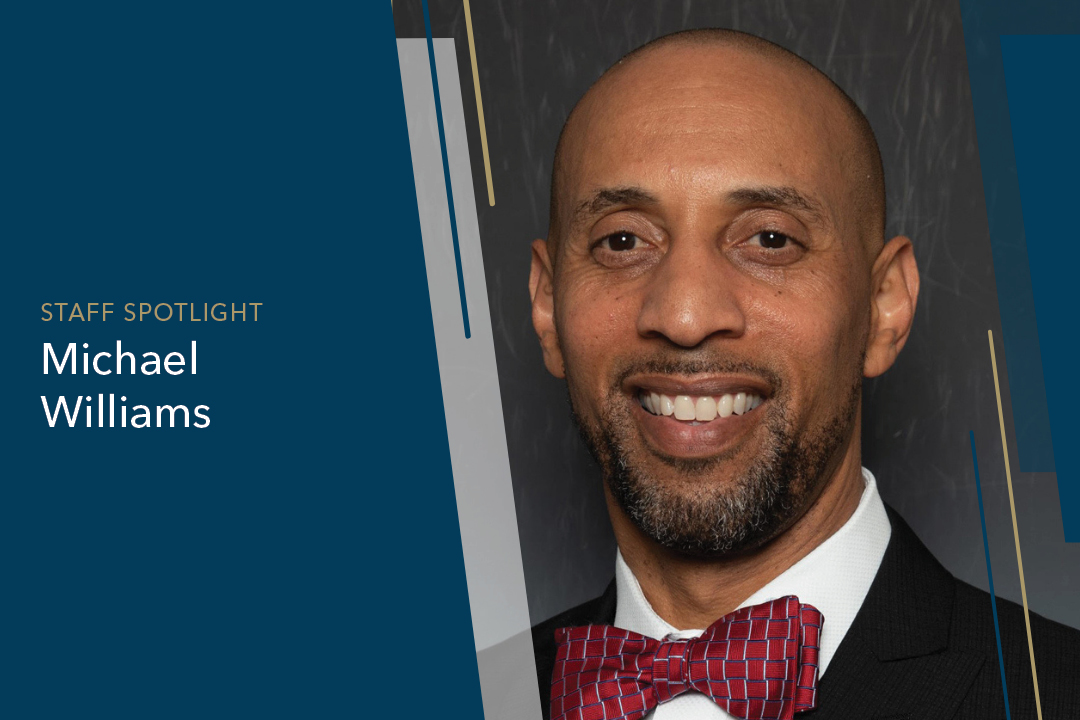 Michael B. Williams, Ph.D. wants students to change their mindset about education: “See the faculty and staff as partners who are investing in you, and your peers as teammates reaching for collective success,” he says.

“Dr. Mike,” GW Nursing’s assistant dean for student affairs, hopes that despite the rapid pace of the 15-month accelerated Bachelor of Science in Nursing (A.B.S.N.) program, students will connect with the school and its resources in a meaningful way.

Dr. Mike honed his approach to student development during 10 years at the United States Naval Academy, where he taught political science courses, served as an academic adviser for hundreds of students, and later served as deputy director for student academic development. During that time, he came to believe that his commitment to students had to extend beyond the four walls of his office. He was a constant presence at athletic and extra-curricular events and became the first civilian faculty member at the Naval Academy to participate in Sea Trials—an intense 14-hour physical and mental challenge that serves as a leadership capstone experience for Naval Academy students’ freshman (plebe) year.

Prior to deciding on a career in academia, Dr. Mike spent more than 20 years in the U.S. Marine Corps, serving in Operations Desert Shield, Desert Storm, and Iraqi Freedom. Then LtCol Williams began pursuing a Ph.D. in public policy analysis toward the end of his career and was offered an opportunity to teach at the U.S. Naval Academy while he completed his dissertation.  It wouldn’t take him long to adapt to his role in academia and he made a new plan for himself—submit for retirement from the Marine Corps and find a small college that would allow him to continue to grow in academia.

Upon his retirement, the Provost of the U.S. Naval Academy offered Dr. Mike the newly created position of deputy director for student academic development. In that role, he evaluated and adapted policies to increase student retention, mentored underprepared students, and helped to identify practices and policies that perpetuated systemic bias within the school.

Although he’d never worked in healthcare before, Dr. Mike knew he’d be a natural fit as the assistant dean for student affairs at the GW School of Nursing because he sees similarities between civilian nurses and service members in terms of character and leadership development. “I know a little about preparing students who need to be individuals of character and competency, individuals who need to have compassion—that’s what you do when you’re training individuals for military leadership,” he says.

Dr. Mike has a specific message for students who, for whatever reason, feel intimidated because they’re surrounded by a cohort of impressive peers. “We didn’t make a mistake when we selected you for the program. You can do this, as long as you feel comfortable asking for help. Trust me, we feel comfortable offering it. Stay motivated, and raise high.”