Healing, Love & Life: How two ABSN students formed a bond so deep they will forever be connected 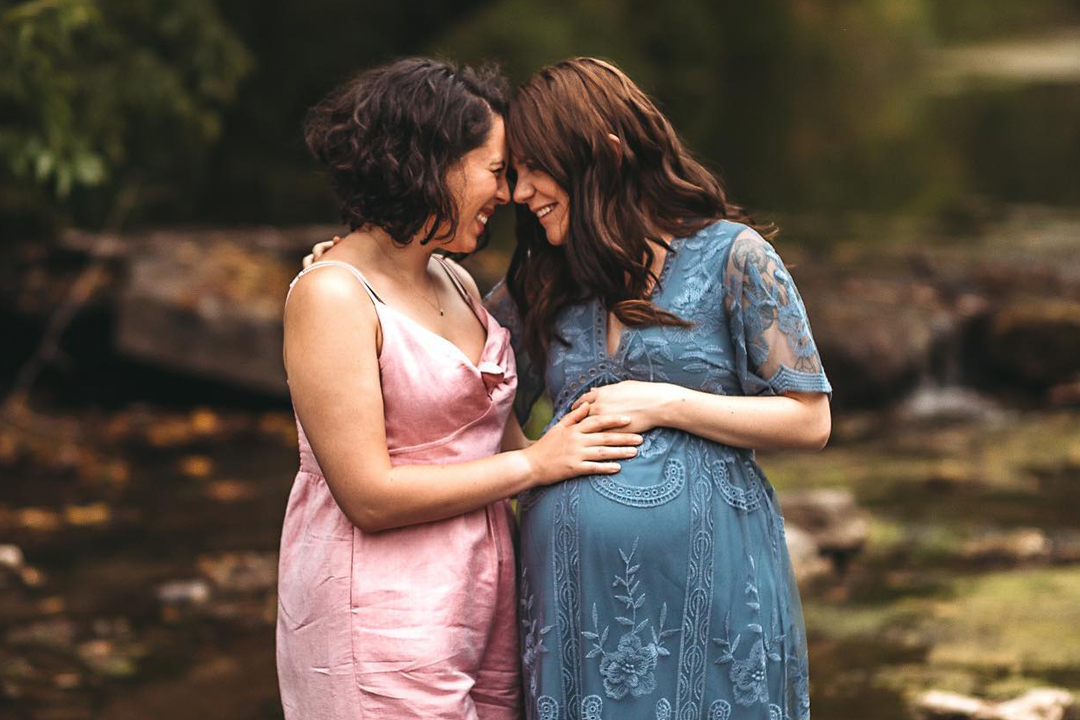 I don’t believe in coincidences. In 2018 I very quickly and fervently left my job in Corporate America so that I could pursue a career in bedside nursing. The universe definitely put me in the right place, with the right people, at exactly the right time.

I came up with every excuse in the book to explain away the sudden symptoms that I was feeling. Unprovoked and sudden nausea, a strange headache, general fatigue… It was my first semester of nursing school, surely that had to be the reason. I had seen many doctors at this point and none of them had any answers for me. All the while I was chugging through early morning clinicals, late night study sessions, and a grueling curriculum that had me and my peers feeling exhausted in general. I had no idea my whole world was about to change.

We were days away from our Head-to-Toe assessment, and I was barely hanging onto my health and sanity. My husband had just been deployed through the Army and I wasn’t sure how I was going to take care of our two dogs, two cats, pass nursing school, and manage the mysterious symptoms I was having. Many of my professors were acutely aware of my symptoms and how I was struggling, and finally one evening I had reached my limit. I stood up from the couch and had a brief moment of near-syncope where my knees began to buckle underneath me and I immediately vomited into the nearest bag. I sat down and sobbed to my mother, who lives in New Jersey, over the phone. We both felt so helpless. I couldn’t take it anymore. The only thing I could think to do was email my lab instructor, Ms. Clarke, who told me that it was time to go to the hospital. I had been enduring for so long and something was very wrong.

I quickly reached out to my two best friends in the program, who coordinated and got me to the hospital. Merrill stayed back with me and helped me through all of the tests and needle-sticks until the doctor came into my ER room at 0200. We were both exhausted; me from the Phenergan they had just pushed to ease my nausea, and Merrill from carting me through the healthcare system for hours at this point. We were both lying peacefully on my hospital gurney when the doctor threw on the lights to explain my head CT. “We found a mass,” he said. “A tumor,” the nurse behind him added. “We don’t know what it is, but we’re transferring you to Inova Fairfax where the best neuro team is. They’re going to take care of you.” I left my body. All I could say was, “I have to go to the bathroom,” and began to stumble off of my gurney. But, to no avail, as my legs gave out from under me and I fell into my nurse’s arms. She placed me back on the bed and I cried into Merrill’s arms, processing the most crushing news I had ever received. Merrill hid her shock and stayed strong for me. She stroked my forehead and told me over and over that it was going to be okay. Part of me believed her and part of me did not.

The next few days were a blur. Merrill immediately got to work alerting the GW faculty of my condition and what happened next I still do not have words for. My GW Nursing community rallied for me in ways that I can never express my gratitude for. In the next few hours a schedule was made for various members of my cohort to walk my dogs, my house was cleaned professionally, and an endless supply of love was poured onto me. My pathophysiology professor, Dr. Vyas reached out to her husband, the director of neurosurgery at Inova Fairfax, who promptly came into my hospital room and pushed me to the head of the line for my diagnostic tests. Again, I don’t believe in coincidences. Once I received my diagnosis, a grade 2 glioma astrocytoma, my world became even more uncertain. I had to face my mortality at 26 years old, let alone whether or not I would graduate from nursing school. But there is one thing that I know and it is that I would not have made it through those coming weeks without the love and support of my GW family. So many people came to my bedside and cried with me, laughed with me, and encouraged me. I was put at the right place at the right time and surrounded with the right people, which I believe is the reason I am still standing strong today. This moment in time also became the beginning of my journey to motherhood, because cancer and pregnancy do not mix.

The first question that I would ask every member of my treatment team was, “when can I safely become pregnant?” It was my neuro-oncologist who finally broached the subject of surrogacy with me. She did not blink when she strongly recommended that I avoid pregnancy. “We have enough anecdotal data to suggest that women with controlled brain tumors, who become pregnant, are left with more aggressive tumors by the end of their pregnancy.” It was then that we had the difficult discussions about how being alive for my children was more important than carrying them myself. I grieved again that I would never carry my babies in my own body. In the coming weeks, I harvested my eggs and began chemo and radiation the next day.

Months passed and chemo and radiation slowed my body in ways that I had never felt. I took one semester off of nursing school to heal and take control of this tumor that had already taken so much from me. I began researching the process of surrogacy and what it would take to grow my baby outside of my own body. The emotional and financial strain of this process put me into months of therapy. Throughout everything, my GW family never abandoned me. In particular, Merrill. With two girls of her own, she selflessly offered to be our surrogate. After everything we had been through, I was brought to my knees. The person who carried me through my life-changing diagnosis was now offering to carry mine and my husband’s baby. She was offering to help me become a mother.

I would never wish this diagnosis upon my worst enemy, but it brought so many life-long friendships and unforgettable moments. Namely, my graduation from the GW Nursing program (as a DAISY Award recipient), the birth of my daughter Eloise Merrill Flowers in June 2020, and the start of my nursing career in the L&D unit at Inova Fair Oaks Hospital. Nursing is not a career for the faint of heart, and I am so grateful that fate brought me to GW and surrounded me with the most amazing faculty and peers. Resilience is perhaps the most important lesson we can learn from this program and as nurses, especially during this time. Never lose sight of that, and just keep going. 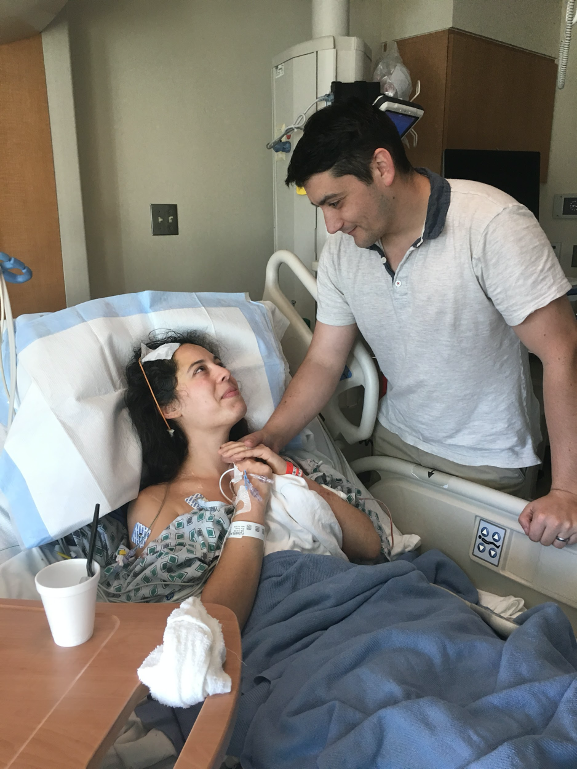 Alexa and her husband, Jon 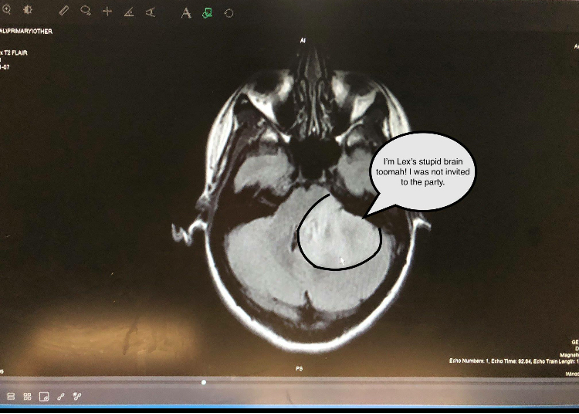 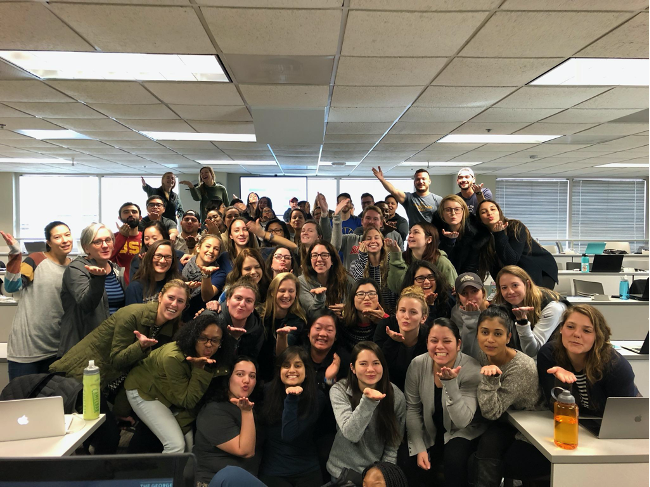 Cohort 18 sending daily pictures while Alexa was in hospital