The Soft Side of Nursing 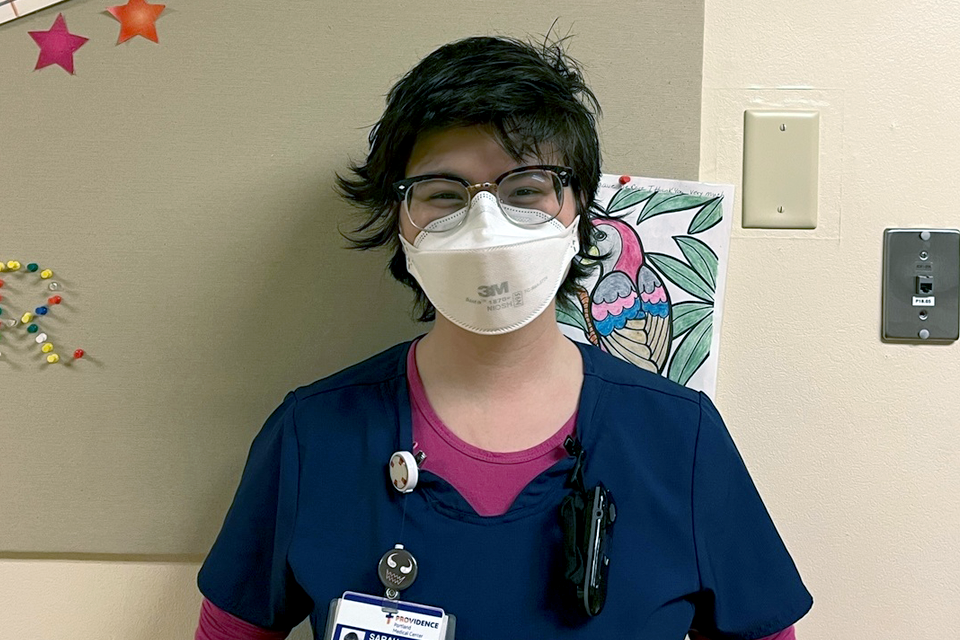 Sarah Palmer comes from a family of nurses – mom, aunts, cousins. But Sarah took a roundabout way to get to nursing. Graduating with a degree in history and English, she pursued other work. In 2016 she started thinking about what she valued, and what was the best use of her time. She returned to school and graduated with a nursing degree in 2019, becoming the sixth nurse in her family. “My mom thinks a lot about the soft side of nursing, caring for patients with kindness and a sense of humor,” said Sarah. That made an impression. Sarah understands the need for the caring aspect of nursing, in addition to the curing aspect of nursing.

She moved to Oregon and started her nursing career in home health care. Sarah then joined Providence Portland in November 2021, becoming a member of the Float Pool team. On one recent shift, she was floated to 8S and the soft side of nursing came into focus. Jeff was one of her four patients that night. That wasn’t his real name. No one knew his name. No one knew his medical history. They did know he was houseless, and his friends called 911 when they found him unresponsive. That is how he ended up at Providence Portland, and on 8S under Sarah’s care that night.

Sarah’s other three patients were stable through the night, providing her extra time to work with Jeff, including giving him the dignity of a bed bath after so long on the streets. At the beginning of her shift he could track with his eyes, but otherwise could or would not respond to any other interaction. Sarah talked and cared for him throughout the night, by morning he had progressed to being able to follow commands with hand movements.

The next night Sarah was floated to 8N. She learned Jeff was not doing well, and not expected to live. That surprised Sarah as she had ended her shift the night before with Jeff seeming to do a little better, although still facing many challenges. When Sarah went on break, she asked the 8S charge nurse if she could spend some time with Jeff. The answer was yes.

Sarah initially sat in a chair on one side of his bed. After a few minutes, she remembered he seemed to have feeling on his other side – that was the hand that had moved the night before. So, she switched sides, kneeling beside the bed as there was no chair. She held his hand, hoping he felt the human touch despite her being double-gloved. “I told Jeff I was sorry I didn’t know his real name; I was sorry we couldn’t make him better. I promised him I would remember him, and I hoped he was comfortable.” She wanted Jeff to know, even though so little was known about him, he was not anonymous. She wanted him to know, that regardless of how he came to Providence, and what his life had been before, he deserved the same care and attention as any other patient.

Sarah eventually ran out of words for Jeff, so reaching back to her English major and love of words, she recited a favorite poem, Wild Geese, by Mary Oliver. Sarah ended her visit with Jeff, saying through tears it was an honor to be his nurse. “Jeff made me a better nurse,” said Sarah. “I want to help those who can’t help themselves. Even at the end of very challenging shifts that feel unproductive, if I am able to point to a moment when I alleviated some suffering, then I am doing the work of a nurse.”